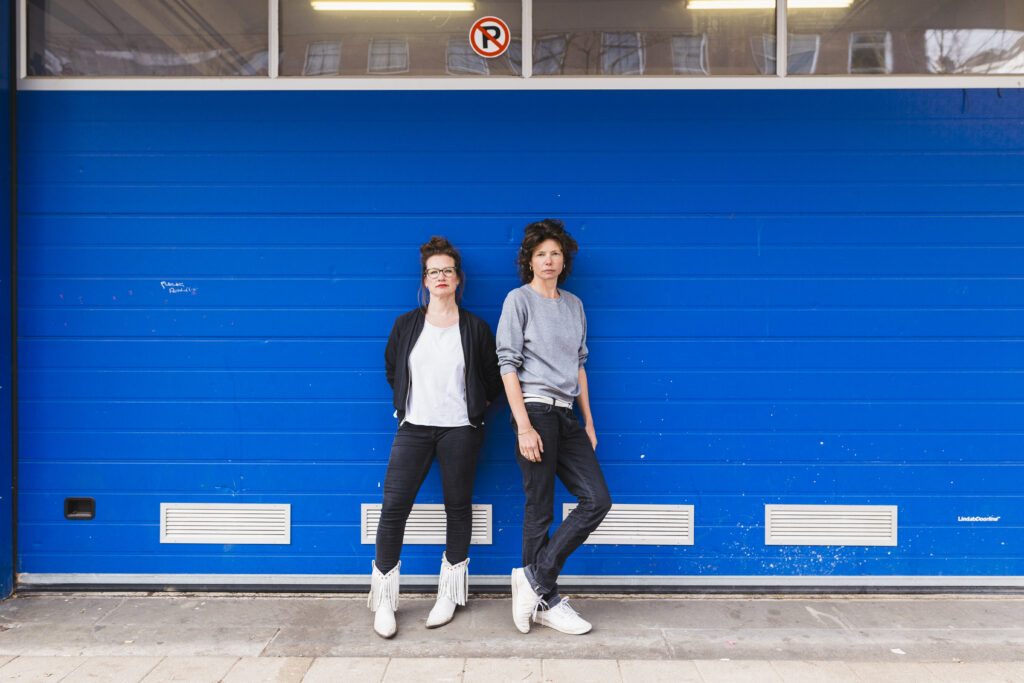 The artist-duo Suzan Boogaerdt and Bianca van der Schoot have been working together ever since they graduated from the Mime Department of the Amsterdam University of the Arts in 1999. Despite their work being deeply embedded in the anarchistic tradition of the Dutch Mime, they have now built a practice that combines several art disciplines.*

Boogaerdt/VanderSchoot’s work has often been described as physical performance and video installation in one—denoting a synergy between the performing arts and the visual arts. Their work lends itself to the grey space, a zone between the black box and the white cube, stretching both theatrical- and museal rules and conventions. The artist-duo creates liminal spaces in which the homo digitalis can train its bodily perception so as to engage with new (virtual) worlds coming into existence. Through a gender-conscious lens they explore how various realities, be it virtual- or dreamworlds, interface with the human user. Their work questions who or what governs the apparatus of the (human) body, how that affects the nature of consciousness, and, consequently, the worlding of multiple realities. They explore corporeality in all its manifestations and play with the idea of a body as an object, a thing amongst things. At this juncture, the presence of the human performer is not necessarily at the core of a piece. Their work often includes masked figures, cyborgs, dolls, avatars, and semi-mechanized characters. It is a form of alienation that makes wonder about ‘What makes us human?’ and reconnect with the creative power of Life itself.

The Visual Statements-series (2011-2014) marks a turning point in Boogaerdt/VanderSchoot’s oeuvre. Inspired by Guy Debord’s Society of the Spectacle and Jean Baudrillard’s concept of the simulacrum, the artist-duo questions the dominant image culture of today’s spectacle society. They expose mediatized representation and its claim to reality. In doing so, they play with the double bind of alienation. On the one hand, the exposure of the spectacle offers a dystopian consideration of contemporary society. On the other hand, it allows for a critical potential. Boogaerdt/VanderSchoot continued their artistic research on digital creatures in the Future Fossils-series (2017-2020). Departing from the question ‘If human beings are no longer the central object, what then is humanity?’ they investigate what it means to make art in a non-human era. In doing so, the relationship between humankind, nature, and technology takes on a more central role. In the upcoming Rooms for Transformation-series (2021-…) Boogaerdt/VanderSchoot attempts to make space for the future and dream new worlds into being. Regarding the emergent (pandemic) present, they aim to create spaces for communal dreaming, care, and healing. They continue to question the fixed idea of what is human so as to transition towards a more livable future for all beings.

On an organizational level Boogaerdt/VanderSchoot is also making space for the future. Since 2021 the artist-duo is setting up a cultural organization in which like-minded artists can contribute to the paradigm shift that is needed for humankind to continue to live on this planet. Together they imagine a transition for society. In respect to the future of the cultural field, the aim is to support sustainable autonomic artistic practices and generate cross-disciplinary encounters in the grey space.

* From the 1960s to the present day, Dutch mime has disrupted and innovated theatre practice. The Dutch Mime tradition is both greatly indebted to the corporeal mime idiom developed by Etienne Decroux and meant a radical break from it. The Dutch offshoot holds great significance to the concept of Zero, but has given a critical twist to it. They developed the concept of Below Zero referring to the need to question what is supposedly neutral (i.e. the norm) so as to ‘look what’s underneath’. Correspondingly, it is less about control and perfection of movement and instead has a more unruly anarchistic take on it.